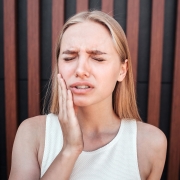 When you are brushing, flossing, or admiring your smile in a mirror, the last thing you want to see is bleeding gums. If you do, this may be a sign something is amiss and needs to be corrected. While it could be due to something simple, it could also be a sign indicating a more serious condition. As for the common causes of bleeding gums, here are some to keep in mind the next time you visit your dentist in Bellbrook.

Vitamin K Deficiency- When bleeding gums result from a Vitamin K deficiency, it can mean you are not eating enough leafy green vegetables, drink an excessive amount of alcohol, or perhaps suffer from a nutrient malabsorption condition such as Crohn’s disease.

Brushing Too Hard- If you are using a toothbrush with hard bristles, switching to a soft-bristled toothbrush will probably eliminate your bleeding gums. If the problem is too much force or associated pain, consult with your dentist in Bellbrook.

Hormonal Changes During Pregnancy- When this occurs, your gums will become sensitive to plaque and bacteria, creating the condition known as pregnancy gingivitis.

Improper Flossing– If you have just started flossing, have not done so in several days, or are flossing multiple times per day, this can cause your gums to bleed.Try increasing your flossing to see if that alleviates the problem.

Use of Blood Thinners- If you suffer from certain bleeding disorders and are on blood-thinning medication, this can lead to easier bleeding at your gum line.

Poor-Fitting Dentures- Should you have dentures or other dental appliances that do not properly fit inside your mouth, your gums can become irritated in numerous spots and bleed quite frequently. Help for dental problems in Bellbrook is available at your dentist’s office.

Vitamin C Deficiency– When you don’t eat enough citrus fruits and potatoes regularly, you can develop a Vitamin C deficiency that leads to a condition known as Scurvy, which over time can cause your gums to bleed very easily.

While it is likely proper brushing and flossing, along with seeing your dentist in Bellbrook on a regular basis for checkups, will eliminate the plaque that eventually turns into tartar and causes gum disease, don’t take anything for granted. Should you be experiencing persistent gum bleeding or other related issues, make an appointment with your dentist as soon as possible.